Chances are if you’re a fan of country music at all, Jenee Fleenor is a gal you’ve seen or heard, whether you realize it or not.  You may have seen her on stage over the last decade, playing with the likes of Terri Clark, Martina McBride, and Blake Shelton. Or perhaps you have heard her fiddlin’ on the radio on hits by Jon Pardi, Rascal Flatts, Reba, and a lengthy list that continues on.

Though Jenee grew up playing classical music in the cozy town of Springdale, Arkansas, her sights were always set on Nashville, TN.  “I got bit by the country music bug when I was around 5 years old. I would hear my dad playing Bob Wills records and fiddle music around the house and I started to develop an ear for it.”  While hearing her fiddle come through the microphone during her first studio visit at eleven years old, Jenee grabbed hold and knew that music is what she wanted to do for the rest of her life.

This road to success was paved greatly by influential women surrounding her along the way. Each placing a stepping stone down to the next.

“I have a good, good Momma and I owe so much to her.  She’s the one that was running me to lessons, sitting in every one of my lessons until I was about twelve years old, making sure I practiced an hour a day, making sure I went to church, and getting me involved in church choirs and orchestras.”

That foundation helped grow a desire in Jenee to affirm her Christian beliefs.  She still credits Anita Stewart to leading her to the Lord.  “I knew there was something missing in my life and it was sweet Anita who prayed with me when I was eleven years old to accept Christ into my life.  It has been the best decision I have ever made.”   This relationship has given her the direction to reach out to other ambitious women, looking for a way to pave their own paths.  When asked to give one piece of sound advice to these fellow dreamers, she quotes Proverbs 3:5-6, “Trust in the LORD with all your heart and lean not on your own understanding; in all your ways submit to him, and he will make your paths straight.”  And let me be the first to tell you, it’s working for her!

Following this advice in the process of following her dreams has led  Jenee to some pretty phenomenal women in the music industry. Women who have not only become career idols, but also forever friends.

“Terri Clark gave me my first big country gig when I was 19 years old and really new to Nashville.  I learned so much about performing and how to entertain a crowd by watching Terri. We all know she’s an amazing singer, but she really knows how to entertain a crowd and hold their attention by her humor and amazing stage presence. I’m so happy to call her my friend…we spent a lot of fun years on the road together.”

Finding her comfort on stage with Terri led to more opportunities to follow.

“I played with Martina McBride for around 6 years and it was such an amazing experience.  I had never played arenas with a headliner act like Martina…and to watch her perform those epic songs every night was so fun.  I learned a lot about singing those high, high harmonies (whew!) which stretched me vocally…and I didn’t play much guitar until I joined her band so it stretched me musically as well.  It was fun to hang with her on a personal level too.  She is such a sweetheart!”

Though she has never met her outside of the world of Facebook, she also credits Wanda Vick as an influential woman in her life.  “Wanda plays fiddle (and dobro, and guitar, and mandolin, and and and) and back in the day she was on TNN a lot. She’s such a fabulous musician, and she would always smile when the camera panned over to her…and that’s always stuck with me.”

And it’s a good thing, since Jenee is not only seeing that airtime with the various artists she performs with, but, also on TV with  her current boss, Blake Shelton, on NBC’s The Voice.  “I’ve been playing in the staff band of The Voice part time for 4-5 years now, thanks to Blake for getting that ball rolling.” 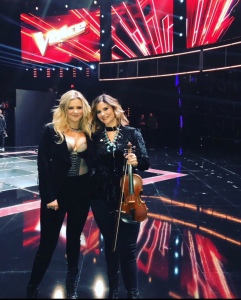 Would you believe me if I said there was more?  The list of this woman’s big breaks and milestones just goes on and on.  Including playing the Grand ole Opry too many times to count.   Recording and touring with Steven Tyler of Aerosmith, and playing with her heroes,  such as Dolly Parton, Alison Krauss, and Ricky Skaggs.  Even when she’s not seen, she’s heard continuously behind the scenes.

“Now my big dream of being a studio musician is really coming into fruition. I’ve done a good bit of studio work in the past, but never heard my fiddle on country radio until the past couple of years. It still freaks me out a little because it takes me back to that moment when I was eleven years old dreaming of hearing my fiddle on those country radio stations.”

Jenee Fleenor is just a breath of fresh air, reminding us that little girls dreams do come true.  That we can be friends with our heroes with a little faith, hard work and determination. And above all that if we can dare it, we can do it!

Currently you can find Jenee on the road with Blake Shelton on his “Country Music Freaks” tour. 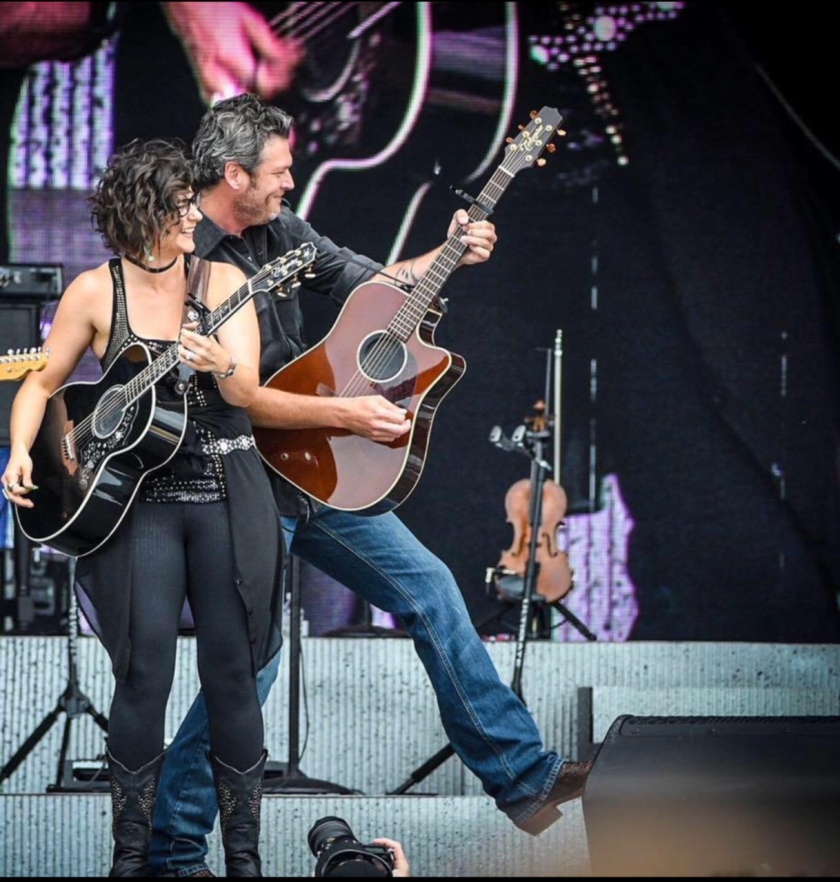